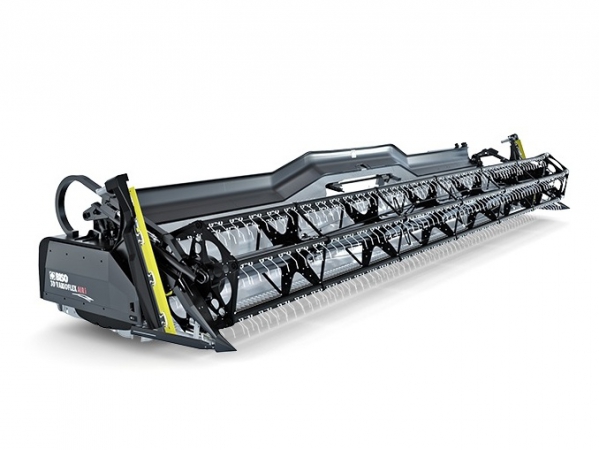 We have been working on the new 3D generation header for many years. We have had several developmental generations and based on detailed analyses, many tests and measurements, we and our customers have come to the conclusion that the future is a combination of intake auger, VARIO system and FLEX cutting deck module.

Parallelogram - the same angle of cut in every situation
The 2D category headers are able to extend the vario and can be fitted with a mechanical FLEX module such as our BISO CropRanger VX TrendLineLightFLEX, however, you will never be able to prevent the logical change of angle of the scythe and double fingers when the flex scythe is moving up or down. If the scythe moves downwards when copying the terrain, the angle increases and the two fingers start to comb the soil. And, vice versa, when the FLEX module rises, the two fingers point to the sky and peek idly out of the vegetation, even though you bury the bar into the ground and shovel the soil under the frame very often.

On the left is the "past". To the right the "future". The new 3D solution from BISO uses a patented system for attaching the mower to the parallelogram, thanks to which the angle of cut, i.e. the scythe and double fingers, is still the same. And this is key when harvesting soybeans or peas, but also high-yield wheat or barley when lying on a field "like a plate".

Entering the new generation bar - 5kg
Only 5 kg of force per double finger must be enough to point lift the module of the new 3D FLEX class, while maintaining a constant cutting angle, i.e. a constant angle of the double fingers. Tests have shown that with a passive system we cannot reach this value, even though we fitted the header with air suspension of the AIR system and, therefore, we developed an intelligent motion control system of the FLEX module parallelogram. Its core is a patented pressure sensor always placed in the reptile of the FLEX module at each parallelogram. This means that each parallelogram in the intelligent version of "AIR i" works completely independently in a fully automatic adaptive mode. The system can work with a pressure from 2 to 50 kg. So 3D means three-dimensional movement, thanks to the BISO VARIO system, the FLEX module with a parallelogram with a constant cutting angle of 10 degrees with the possibility of setting the pressure from 2-50 kg.

The parallelogram in practice. For the BISO VARIOFLEX headers, we used the "AIR i" specification, i.e. with air suspension and patented pressure sensors with intelligent control with the possibility of setting the pressure from 2-50 kg. To give you an idea, mechanical systems on the market work with a pressure of around 80 kg and more.

3D - not just for soy
The requirements of our customers for the headers of the new 3D generation are relatively clear. They only want one header, they want to change the settings for individual crops in extreme conditions several times in one day, and above all, they require the FLEX module even for headers with a width of 9 m and more. And not just for soybean harvesting. And with all that, especially customers in Europe have one clear condition - they CAN'T GIVE UP THE RUNNING SCREW AND VARIO SYSTEM. Because they know why.

Let's not forget the torsional load of the scythe
When harvesting soybeans or peas, the lifespan of a branded scythe can be as little as 50 ha, if the scythe moves continuously in the sandy soil of a certain type. Its service life is also affected by a number of other parameters that are neglected. And the key one is the torsional load. If the classic FLEX module without a parallelogram starts to curl, by changing the angle, the scythe not only bends, but above all also twists. This significantly increases its resistance, wear and especially the load on the drives (gearbox, belt and cardan) and, of course, fuel consumption. The system with the parallelogram of the new BISO 3D headers completely eliminates this problem and the scythe is now stressed only by bending according to the plot profile when the flex module is activated. Another important criterion is the speed of the scythe, but more about it later.

Diagram of the parallelogram integrated into the patented BISO VARIO system. The left picture shows the solution used by the BISO CropRanger VX and BISO ULTRALIGHT models, the right picture shows the solution used in the new BISO 3D VARIOFLEX AIR i model. Not only the maximum extension of the VARIO cutting table when harvesting rape is important, but also the opposite value - the minimum distance of the scythe from the intake auger. A key value when harvesting short crops such as barley. And here BISO with its 180mm offers another unbeatable value. 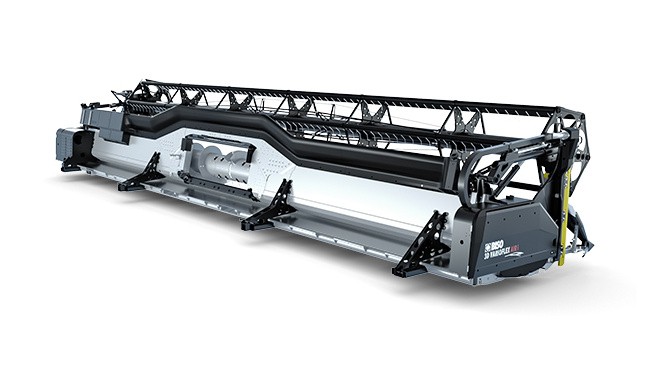 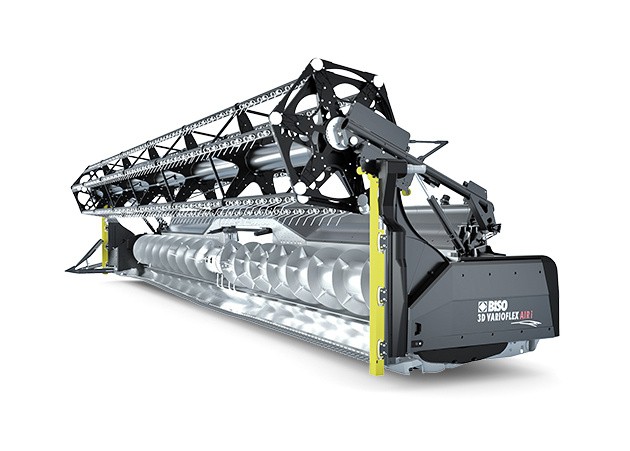