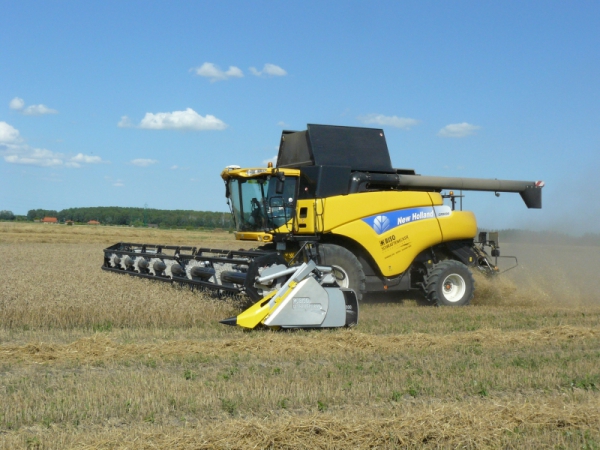 Did you know that in the picturesque town of Ort im Innkreis, BISO Schrattenecker has taken another step forward, as it has in its slogan? Yes, that's right, and maybe you can say up to three extra steps. Sure, it may sound a bit like praise in my words, but it's not so. The independent German institute DLG itself rewarded us for these three steps, and we are proud of it. It is not a rule that small factories are awarded at prestigious international agricultural exhibitions such as Agritechnica 2009 in Hanover. However, we managed it last year again.

Speaking of which, already in 2001, the BISO VX CropRanger variable header won a silver medal for innovation in harvesting technology. At that time, our header can be said to be ahead of its time, because it was the first to be able to extend and retract the cutting floor of the header for harvesting oilseed rape without the need to install a rape adapter or expansion plates.CropRanger still arouses the interest of customers, not only with the possibility of extending up to 70 cm electro-hydraulically from the cab, but also with the possibility of electric adjustment of the reels,  stainless steel auger and massive frame, which is necessary for vario headers. The main advantage of the CropRanger is the hinged extension of the vario from the cutting floor of the main frame of the table, which means that even on any plot, the vario protects the lower frame of the header and mainly, lying crops with a minimum stubble height can be cut. These advantages are missed by other manufacturers of mowing vario, because thanks to our patent they are forced to slide the vario from above the main frame. CropRanger is produced in 525, 650, 750, 850, and 900 mm widths for all types of combine harvesters. Annual production is about 200 - 250 pieces.

An absolute novelty and I think we can say a historical milestone in the technology of production of headers is a brand new BISO Ultralight 800 header. It is a completely different direction of production and especially of thinking about how to design headers with a reach of up to almost 15 meters. A real revolution, a header of a new generation. THE BISO PATENT. Our new header won a silver medal at the Agritechnica 2009 exhibition. The main emphasis, the main idea is: minimum weight. Because we have been producing vario headers for a very long time, the most important about it is a solid frame. However, with such large widths (up to 14.2 m) there is a problem with the weight of the steel frame itself, and the combine-harvester would have a problem lifting the bar at all. And that is the first step forward. Patented hollow aluminium frame with internal ribbing, which consists of 1060 mm wide segments. The aluminium alloy is essentially inert to bending, but very strong and light. This is what we bet on and the weight of the header with a reach of 12 m is just below the limit of 4 tons.

The production of the frame is basically a jigsaw puzzle. On the assembly stand, the middle part with attachment to the inclined conveyor, the required number of segments, according to the engagement of the rail, and the end parts with holders for the drive system are stacked together. All this is glued together with a high-strengthglueand screwed. How simple. The big advantage is that we currently do not have to plan the production according to the size of the frame. We simply assemble exactly the header that you order.  Production starts at 7.7 m and ends at 14.2 m. The first step, as I said, is the patented aluminium frame. The second step is the vario ejection system. From zero position up to + 70 cm forward, but also minus 10 cm back below the main frame. The negative position is important when harvesting low standing crops. The third step is the patented production of an active rapeseed divider frame made of aluminium. This makes it lighter and it weighs only 20 kg. This patent is also associated with a patented attachment to the bar frame without the need for disassembly when harvesting cereals. It just folds along the header. We also exhibited the new Ultralight 800 header with a reach of 12 m at the Techagro 2010 international trade fair which took place at the end of March in Brno. Only the shot itself arouses respect and especially the interest of visitors. What interested visitors the most was the aluminium frame, how it works, how it is made, and other technological elements.

However, the BISO company is probably the best-known for its production of rapeseed adapters. Who wouldn't know them when the annual production is around 2,500 pieces. It is used for all types of headers. You can also order a rapeseed adapter for 10 or more year-old cutting bars. There is no problem with that. The CX100 model series, as the correct designation of the rapeseed adapter is, is manufactured with one or two active dividers and there is a choice of electric or hydraulic drive. The electric is a cheaper option, the hydraulic drive is a real classic. Both systems have switching control from the cab. Rapeseed adapters are manufactured for headers with a range from 4 m up to 9 m.

The product that has recently become very popular is called BISO Flex, or a mowable header for harvesting low-growing crops such as soybeans, peas, and beans. Thanks to its mower design, this adapter can completely shave the land. It is with these crops that it is important to keep harvest losses to a minimum. The construction of the adapter is made so that the cutting knife is placed on a floating plate, divided every 15 cm. This floating system can deal with every unevenness of the land and copy it in detail. The mowing system itself is adapted to this, so the scythe flops are slightly shorter than standard and mainly open double-fingered reels are used here. This is due to the possibility of a partial deflection of the mower. The adapter can be mounted in half an hour on each header with a maximum reach of 9 m.

Even though the harvest is ahead of us, it is, however, slowly starting to knock on the door. We must, therefore, also remember the adapters for harvesting broad-leaved crops such as sunflowers and corn. We have both adapters on offer. The first is a very simple drive system for the auger, retraction chains, and vibration system for each section separately. This vibrating system is important so that the sunflower seeds do not accumulate on the individual sections but are continuously shaken to the continuous auger. The range of the adapter is 6 or 12 lines. The corn adapter is produced in 6, 8 and 12 rows with a choice of 70 or 75 cm row spacing. Each section is driven by a central shaft but each has its own clutch in case the section is overloaded. The clutch slips, thus preventing the drive of the individual section from being destroyed. In the standard, the supplied stem crusher is located under the pull-in chains and rollers. As was the case with the above-mentioned adapters, the rule also applies here: production for all combine harvesters in the world.

When I talked about three steps forward at the beginning and you doubted it, I think I followed those three steps. Let's look forward to the next step together. Which direction will it be? 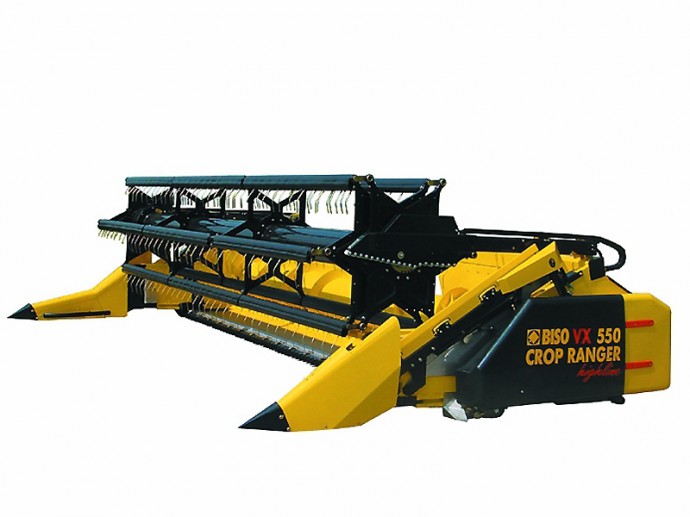 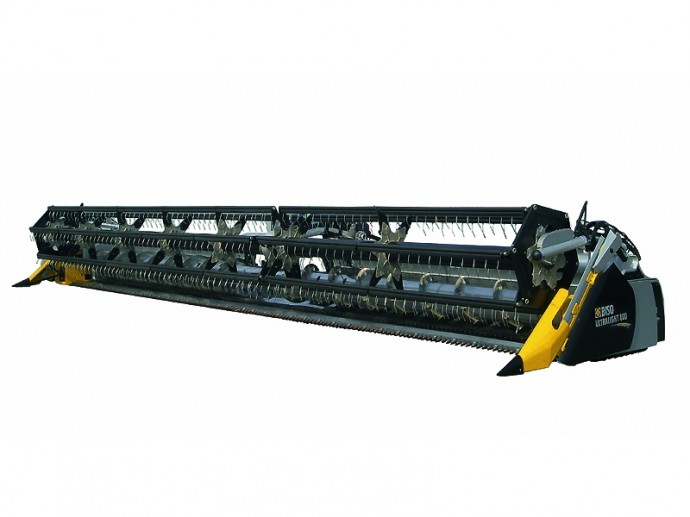 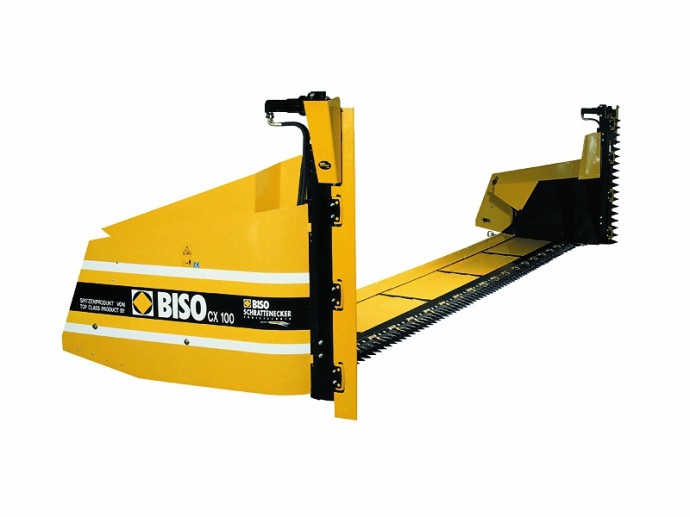 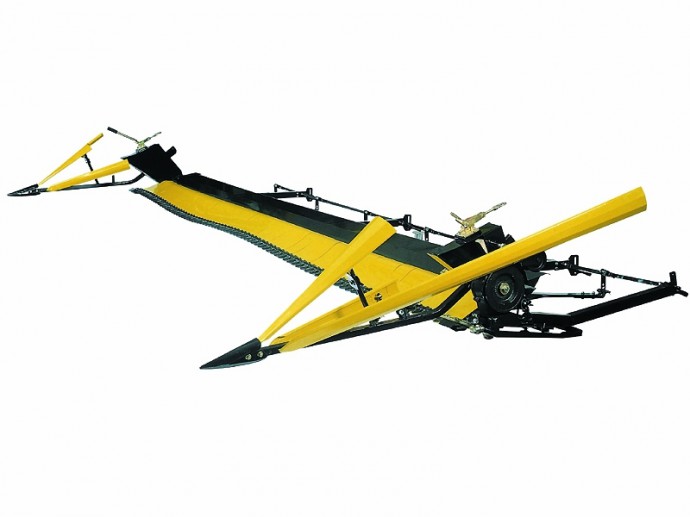 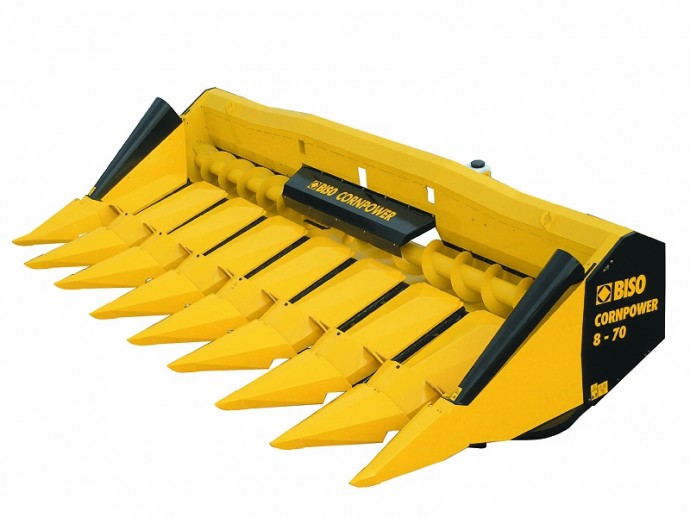 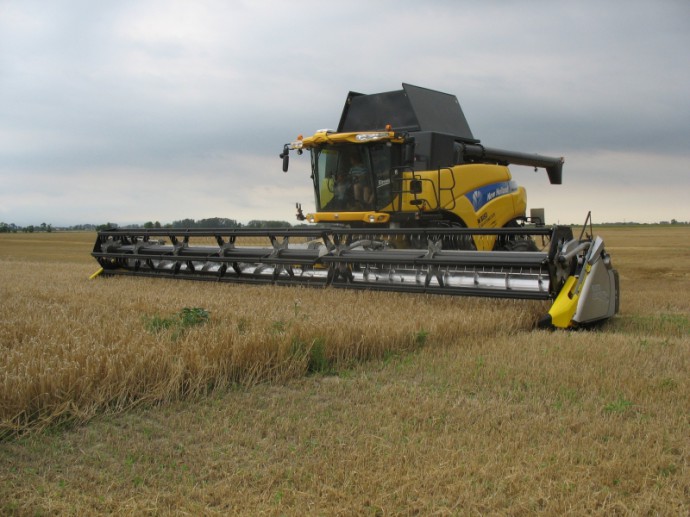