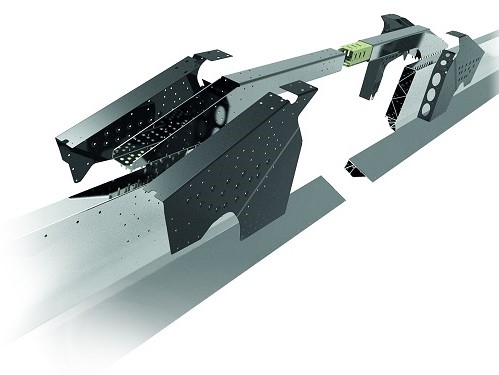 The key issue for a long lifetime of the header is a strong frame and a good trolley for header transport. The high quality header will not be recognized after one year in service, but after 10.000ha harvested and thousands of kilometers of transport on the header trailer. The steel header works well up to maximum 9m. And our steel frames apparently survive the most. The only solution is something we in BISO after years of research and development call the HYBRID FRAME. 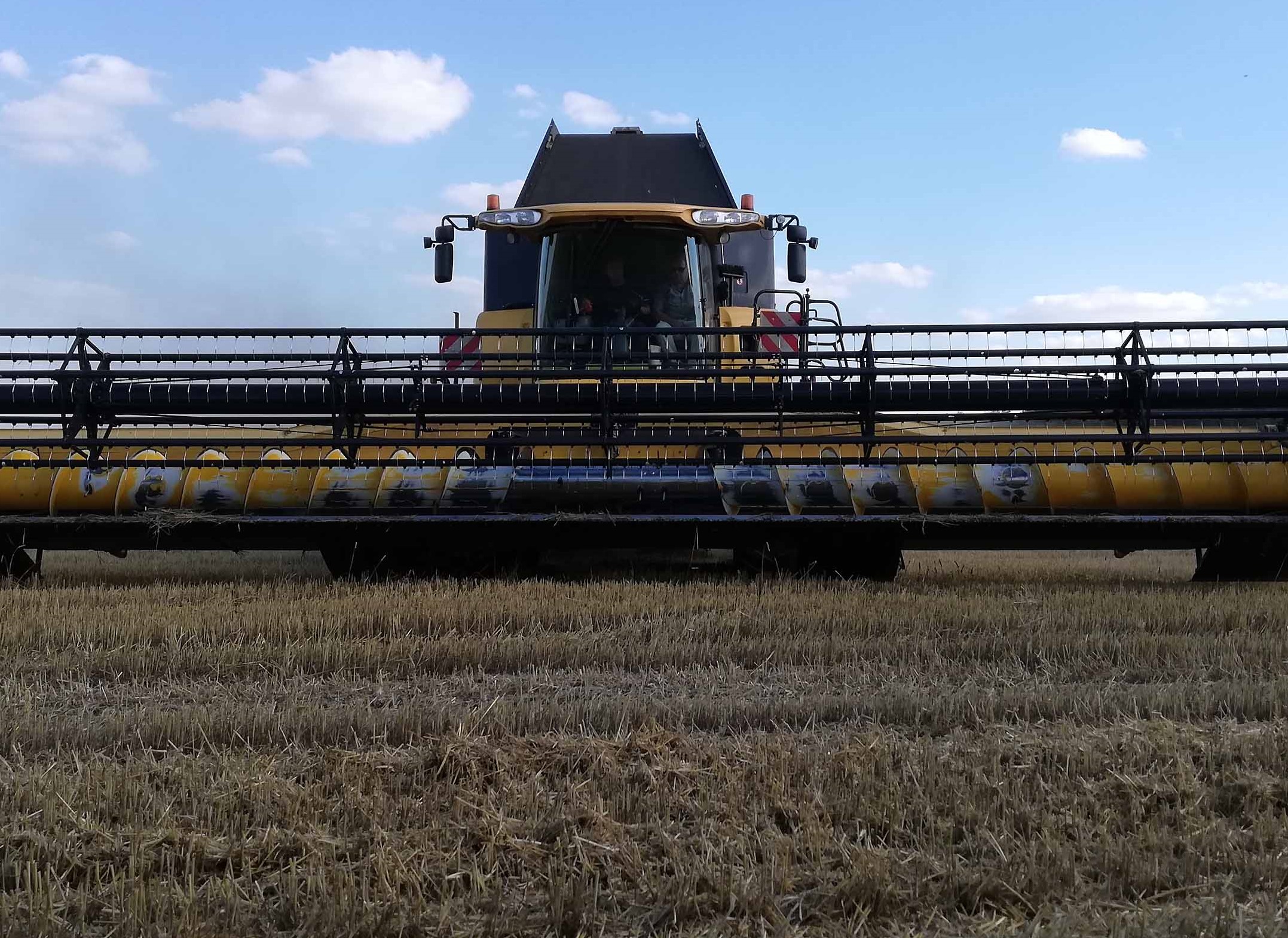 Already at a working width of 8.5-9.0m the steel frame springs so much that the durability of auger bearings and all drive components suffer. For hybrid frames which combine aluminum and steel the compression is minimal and the customer will evaluate their advantages after some years of work. The advantages of this technology can be seen on the headers with a working width about 12m. We used this technology for the first time on 3rd generation Ultralight headers and customers appreciated the real profit from this technology after some years of work. Extremely strong HYBRID frame is also the basic prerequisite for a well working VARIO system with an extinction of 800mm and the ability to slide the scythe almost under the continuous auger. In practice, this means that we can pull the scythe back to the auger at a distance of only 170mm. And this is a value, which interests you during the harvest of extremely short barley. 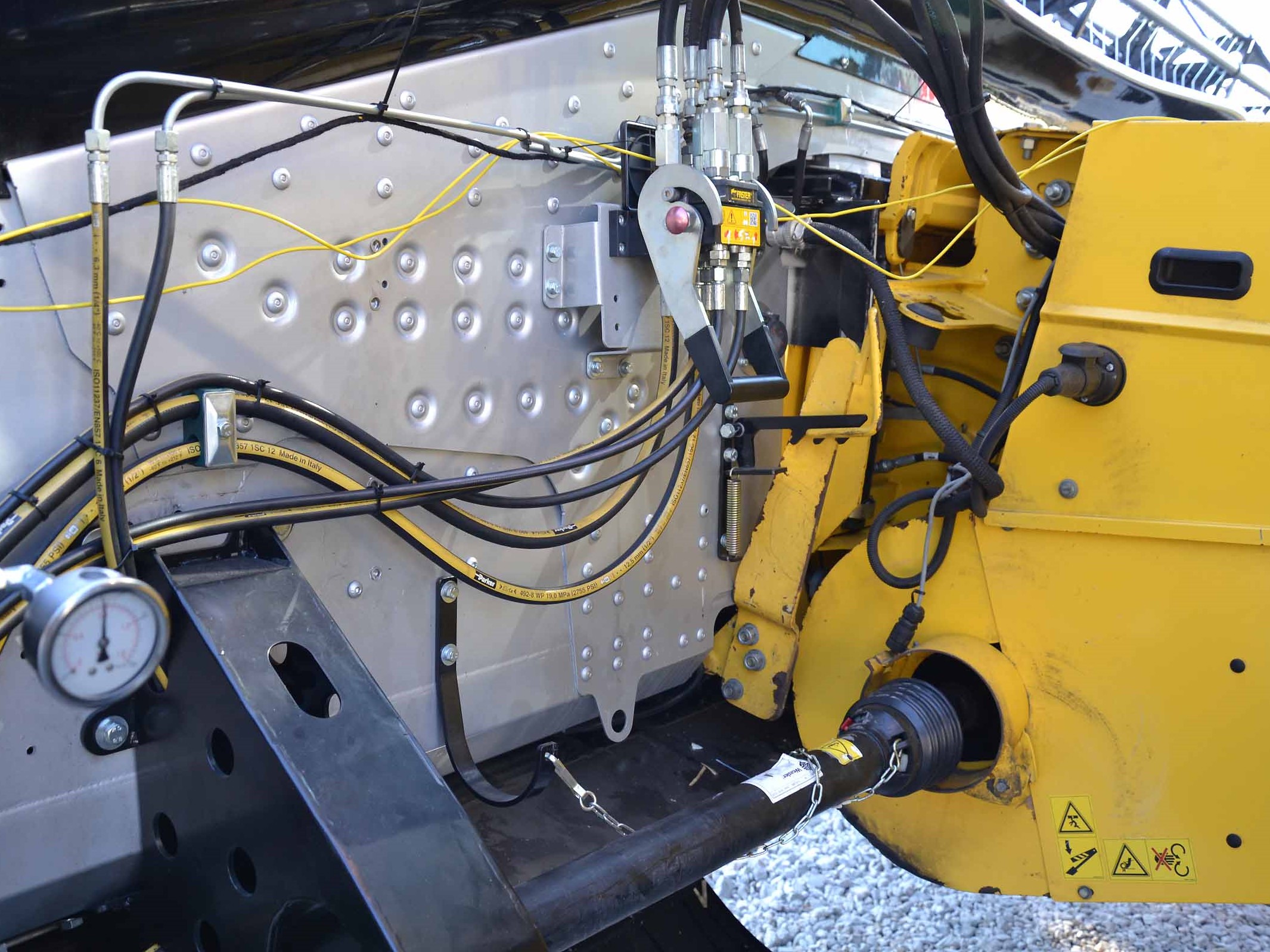 The design of the middle section of a hybrid frame already on the 3D VarioFlex AIR i header (photo made during the tests in 2018).

At the Agritechnica Fair 2007 in Hanover, we introduced the BISO VX1200 CropRanger PremiumPlus header with a 12m working width. This was the header with a steel frame and with the FLEX module. Due to weight reason, the header was equipped with air suspended supporting wheels. This means that the combine was rather pushing the header ahead than holding it up. We call this solution as the 1st generation Ultralight and the first experience with it showed us that this is not the way to go. Already in 2009, BISO received a silver medal for first aluminum header, model line UltraLight 800 at the Agritechnica fair. This header had a fully aluminum frame including sidewalls of the drive lines. An interesting feature of this header was the sectional frame made from modules, which were screwed and glued together. The main advantage of the sectional design was supposed to be the easy repairs in case of damage to some part of the header in service. The working widths in offer - 770, 870, 990, 1050, 1200, 1290, 1420 – are also based on the combination of the widths of the modules. In 2011, the structure of the models was a little updated. No changes for smaller models 770, 870 a 990 but the bigger models 1070, 1200, 1290, 1410 were redesigned. 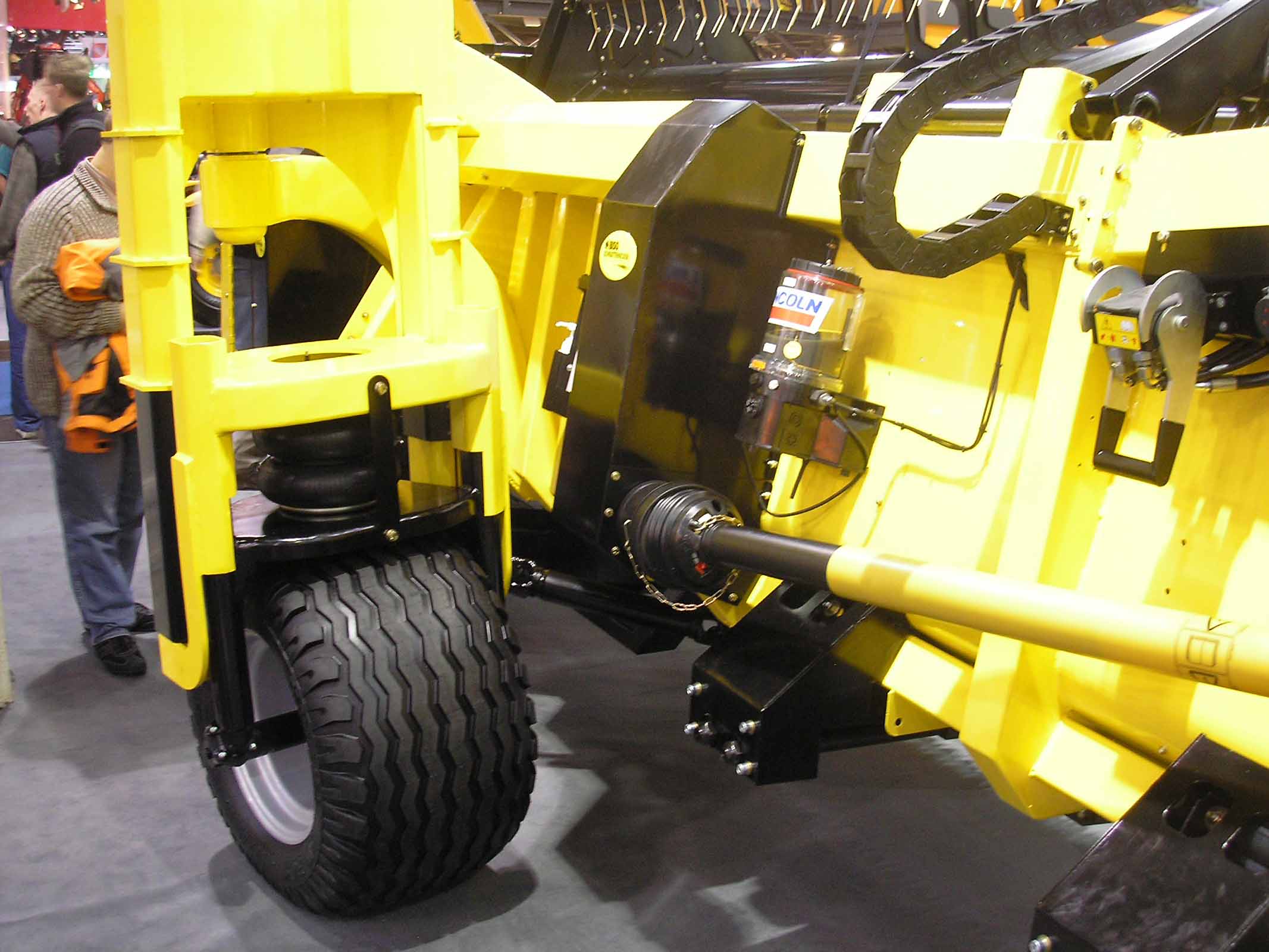 Agritechnica 2007 – air-suspended, fully integrated support wheels on the 12 meters header with a steel frame. The combine pushed the header in from of him. We presented the same header to our customers at the Techagro fair 2008 in Brno. 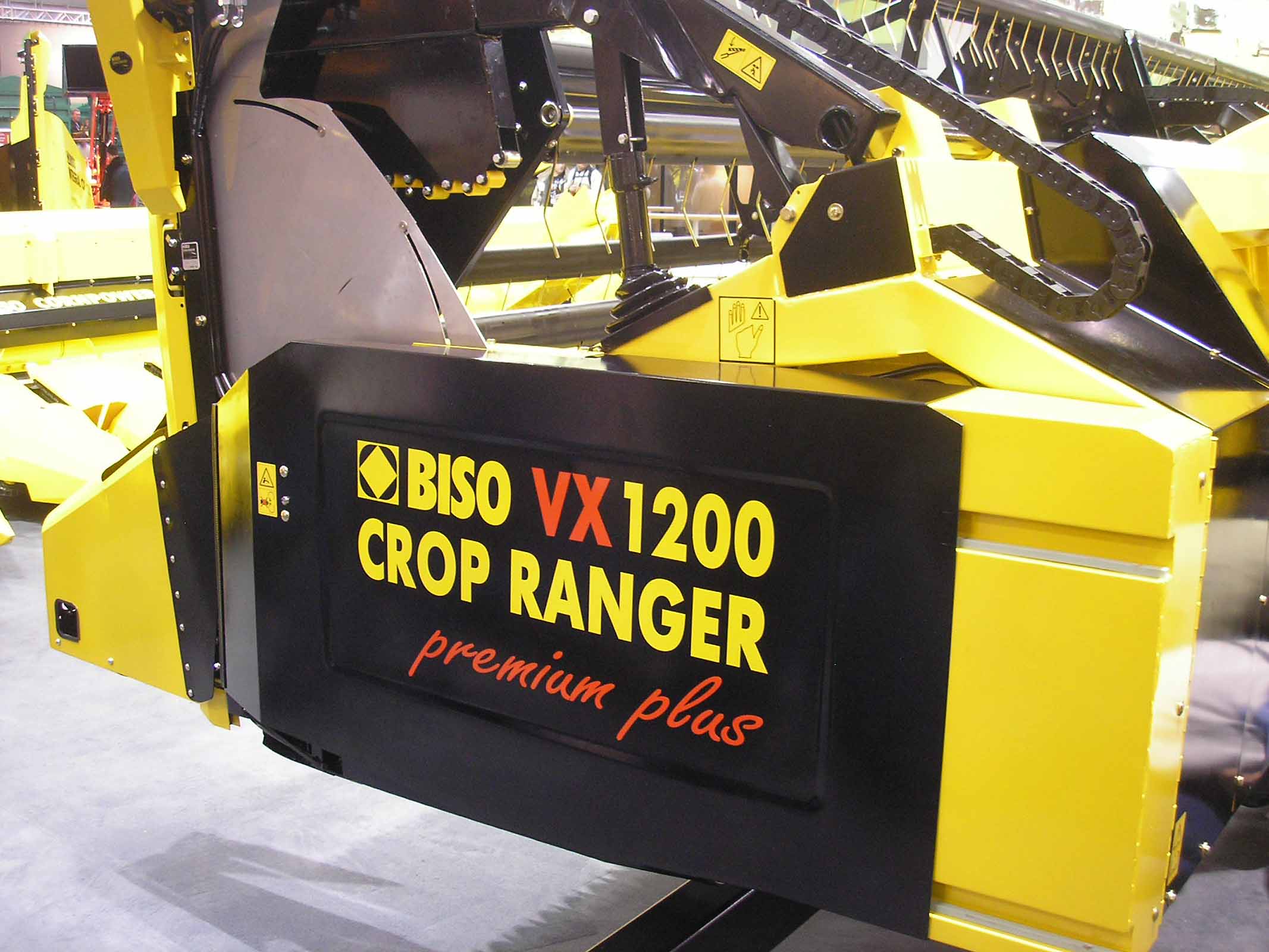 Agritechnica 2007 – the first attempt with 12 m working width header was called CropRanger VX1200 Premium Plus and was already equipped with the FLEX module. 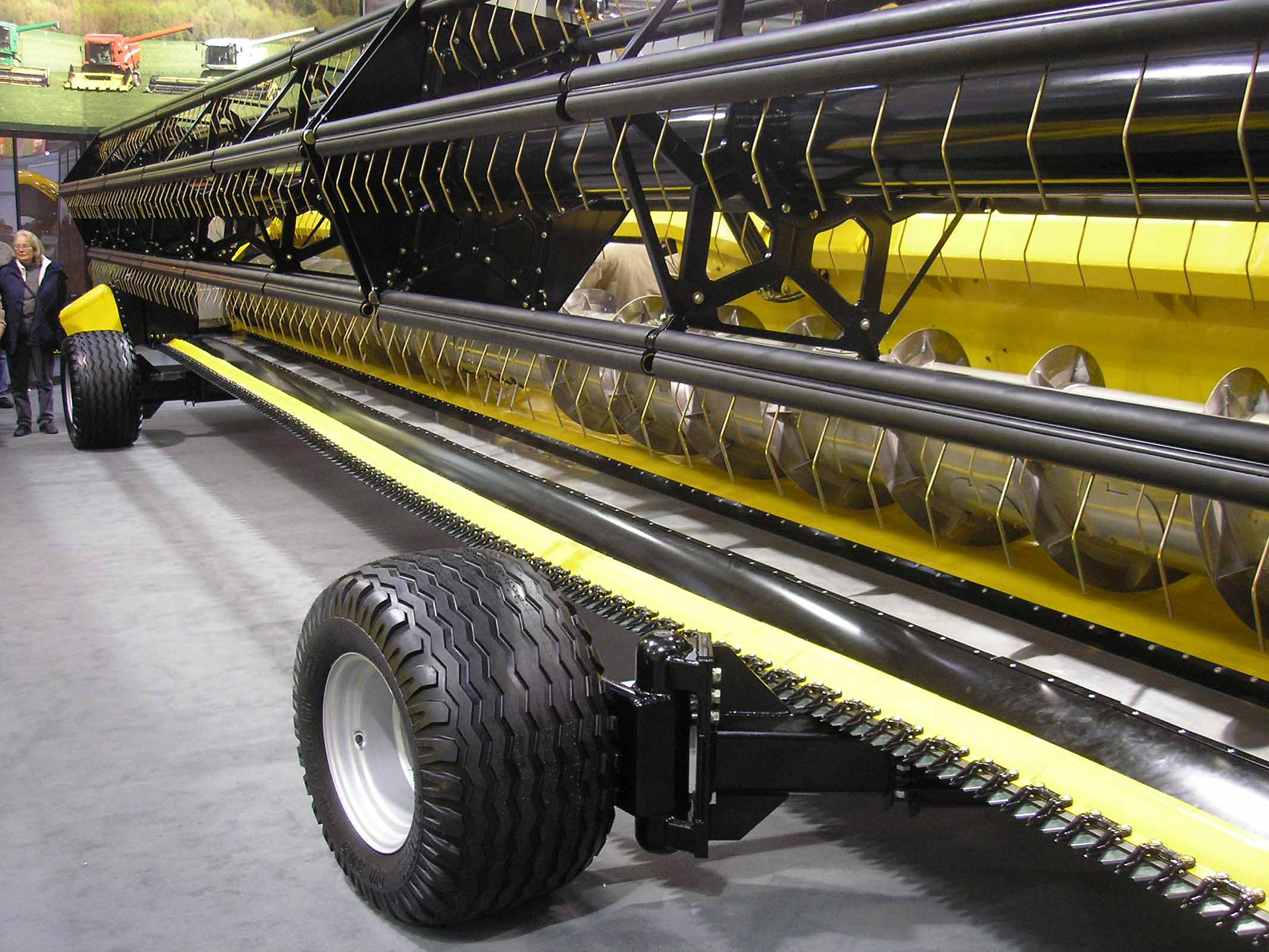 We are looking at the same header scythe and a unique integrated chassis. Of interest is also the central drive of non-symmetrically divided auger and reel. The steel frame was the main limit of this design and we abandoned this solution for many various reasons.

At the end of 2012, the production of the 3rd generation Ultralight with a completely new frame from aluminum profiles called “sandwiches” in combination with steel parts (for example the middle section of console for combine feeder house) started. And this new frame became known as HYBRIDE FRAME thanks to the combination of the aluminum and steel parts. In the 2013 pricelist, three models - 1070, 1220 and 1410 - appeared. In 2013, this new 3rd generation Ultralight model was shown at the Angritechnica fair in Hanover and was referred to as NEW ULTRALIGHT. Most of the produced headers have aluminum sidewalls (the drive is usually from both sides) which was the result of extreme effort to save every kilogram of weight. The main market for this header category has always been Germany, where most of them ride. The 2nd and the 3rd generation Ultralight models operate in the UK, Australia or in Canada. From this point of view, important markets are the Czech Republic and Slovakia. The customers who have been working with these headers for 5 and more years appreciate the strong frame and long lifetime of all components. Already the 2nd generation Ultralight models had an extremely strong frame, but thanks to the hybrid frame, the 3rd generation gained extreme strength against competition and in line with this, the other components gained significantly longer lifetime of all bearing and minimal load on the auger resulting in minimal auger cracking. 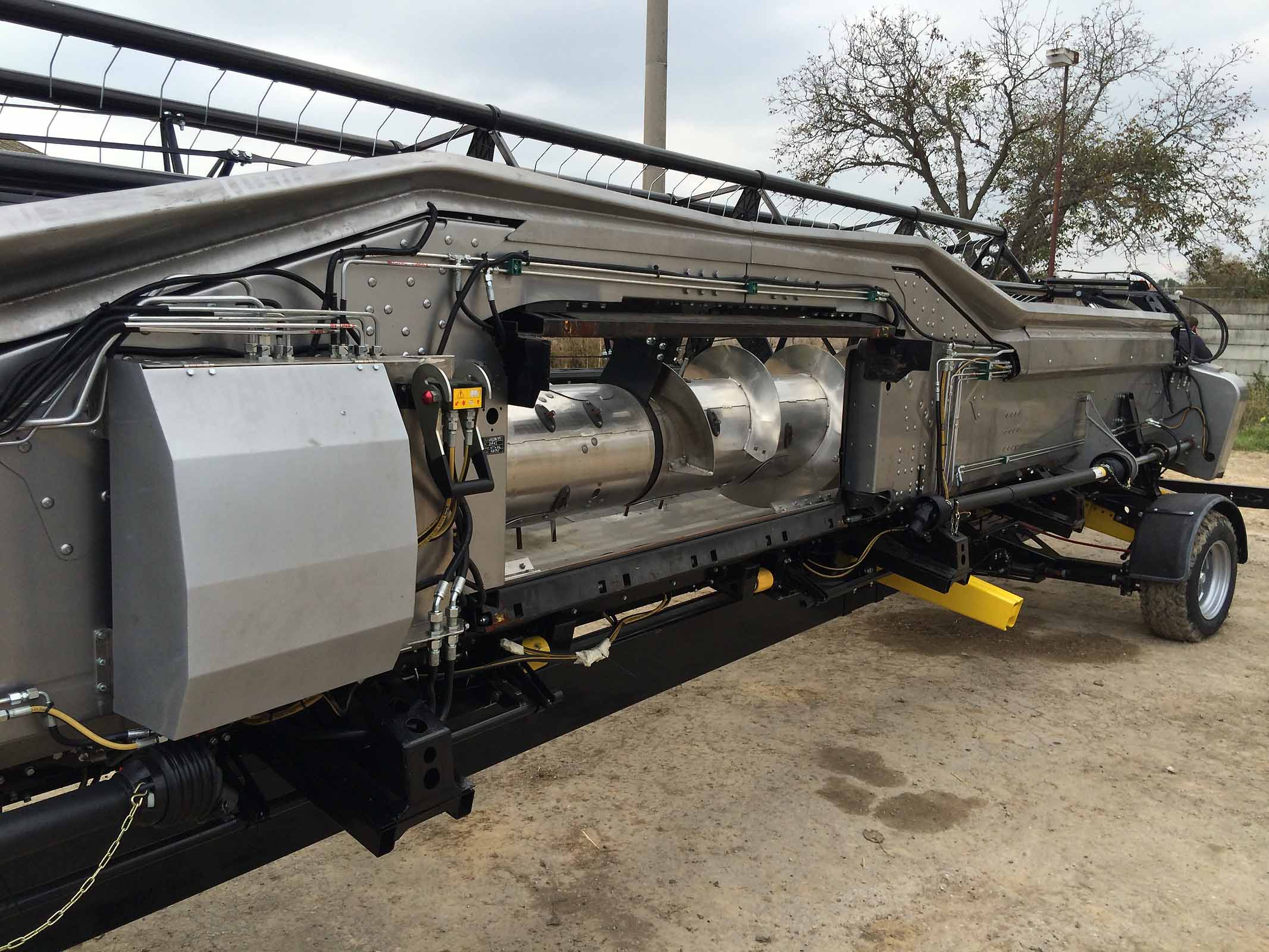 An interesting design of the hybrid frame on the ULTRALIGHT UL1070 header equipped with the 1st generation FLEX module already in 2014 (photo from factory tests in Slovakia). 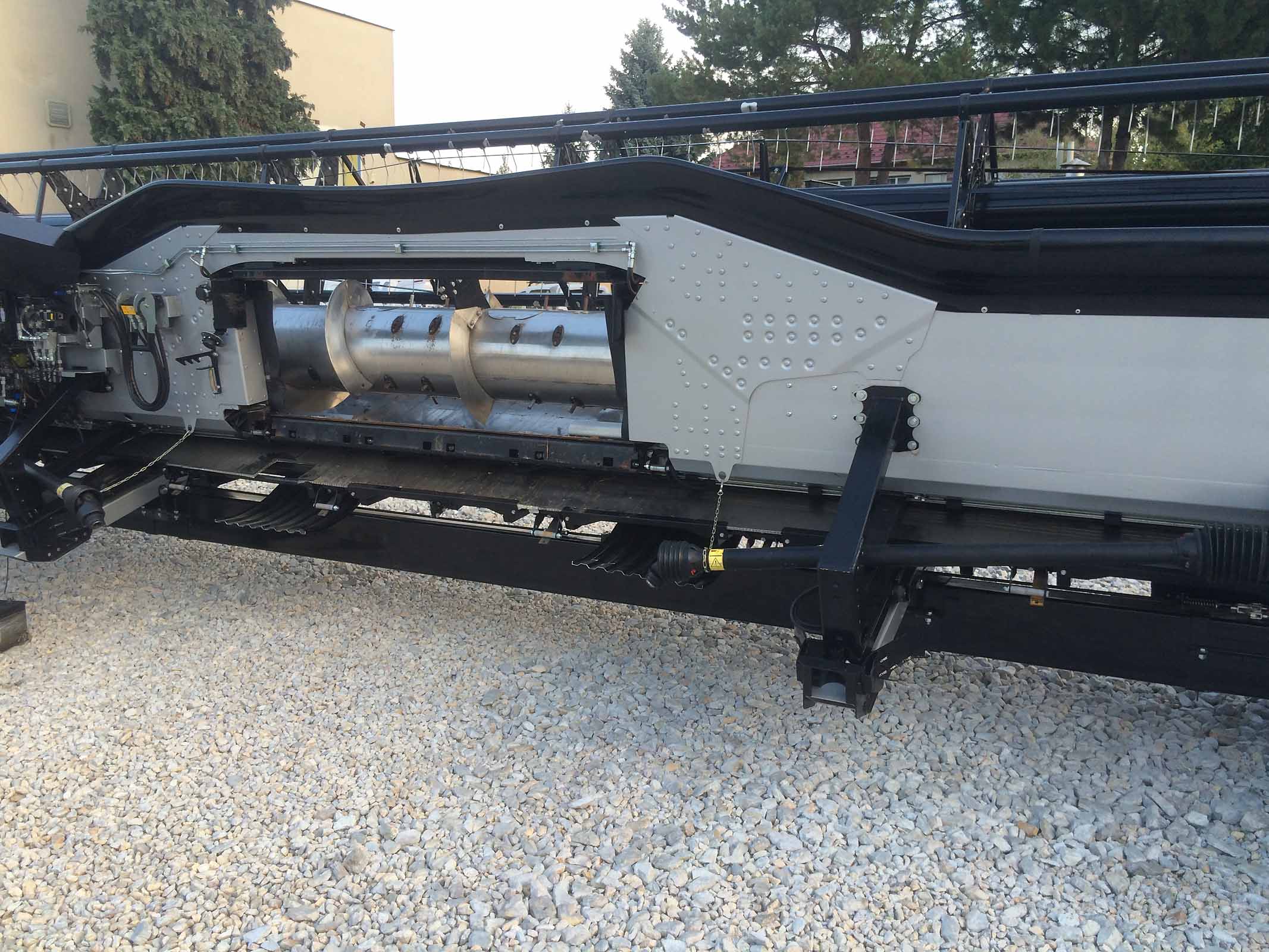 The picture of the frame during the testing of the first versions of 3D VarioFlex. The system of the central bearing of the auger and the arrangement of the drives no longer change in fundamentally. (BISO Hurbanovo, Slovakia 2017).

For the upcoming 2014 season, two models of Ultralight 1070 and 1230 were ready for production already in combination with the ProfiSteer trailer with a steerable rear axle (for headers with a working width longer than 12m it is a must). For the 2015 season, we made our offer wider thanks to 770 and 920 models with a one side drive, meanwhile the 1070 and 1230 stayed without any change. It’s good to mention that Ultralight 920 was usually produced with double-sided drives thanks to production unification reasons. And this solution became very popular among customers operating with the 9.2 working width (every gearbox drives only 4.6m long scythes). The drivers praise this in spite of the morning maintenance check which has to be done with the drives on both sides. 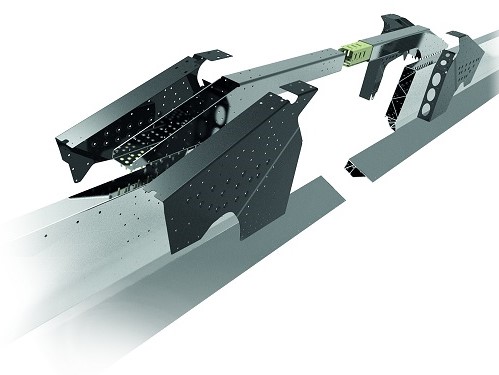 Hybrid frame schematic – the result of more than 10 years of intensive tests. We are working on the 3rd generation now. The frames are calculated for rails with a width of 18m.

In the end, the sectional frame design did not bring the service advantage

At the beginning of the decision that, just like in the automotive industry, the only right solution will be the use of the aluminum alloys, immediately, an argument emerged: What about the service in the field? How will we repair the frame damage? For this reason, we used a sectional solution with the idea to change only the broken module in case of an accident of the combine with some obstacle. Our experience and practice is such that if you hit the irrigation system or hydrant with the steel header, we are able to repair the frame. In most cases, however, the customer transports the header to the BISO factory, where we are able to dismantle all parts much faster and in a much more effective way and repair the frame on professional level. In the factory, we are able to repair any kind of frame damage, but we often come across the economical calculation, when producing a new frame is very often cheaper than repairing the old one. Therefore, in case of a bigger damage of a header frame with a reach of more than 9m, the clients usually change the frame for a new one. And based on these facts, the use of HYBRID frames does not appear to be a problem anymore after many years of experience. 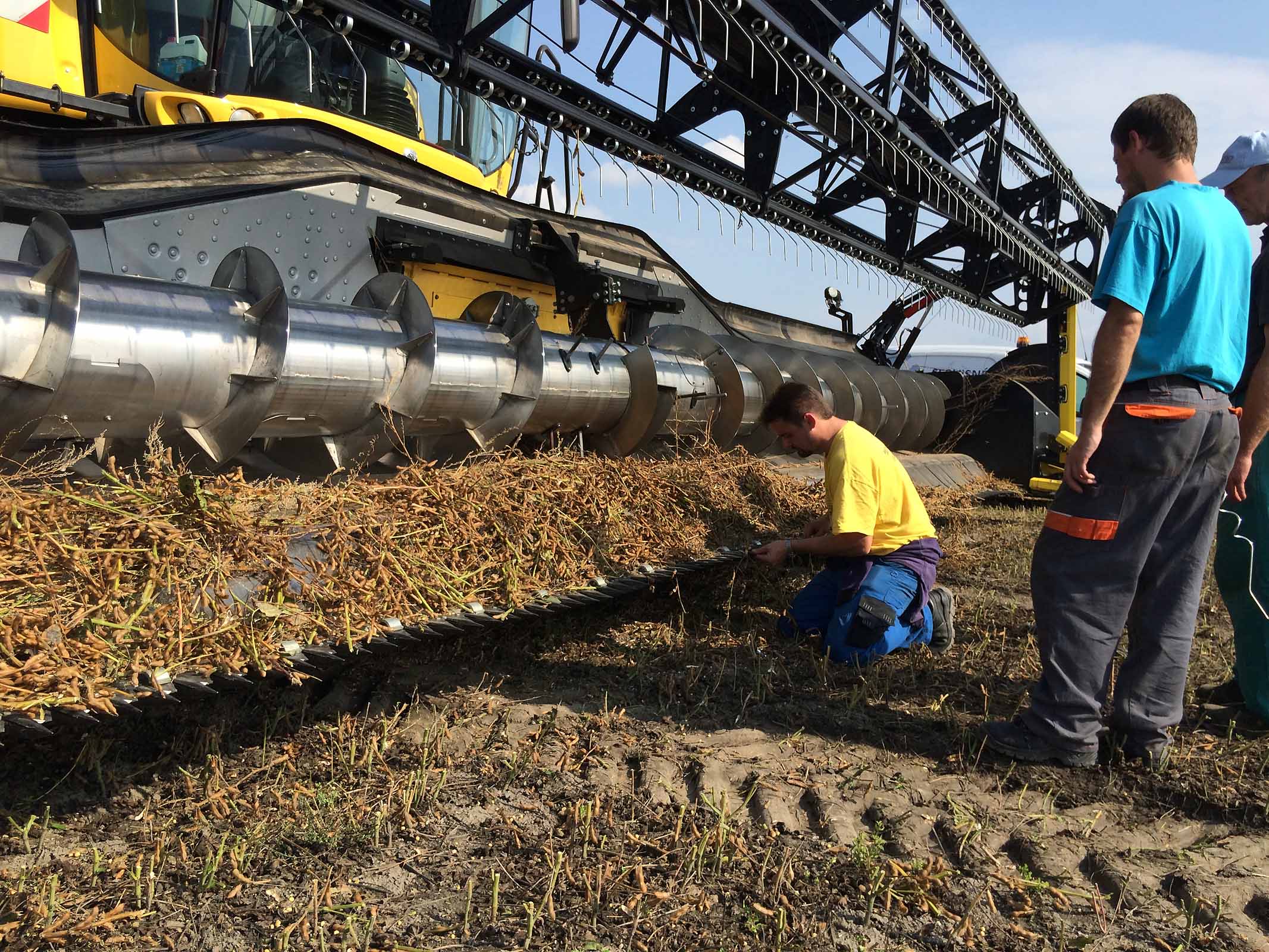 The tests of the middle section (the place, where the left and right scythe are overlapping each other) are generally very important if the FLEX module is activated. In the picture you can clearly see the middle console of the auger, which has proven itself in all crops during the tests. In the picture you can see the 3D VarioFlex 1070 AIR i (Komarno, Slovakia, 2017). 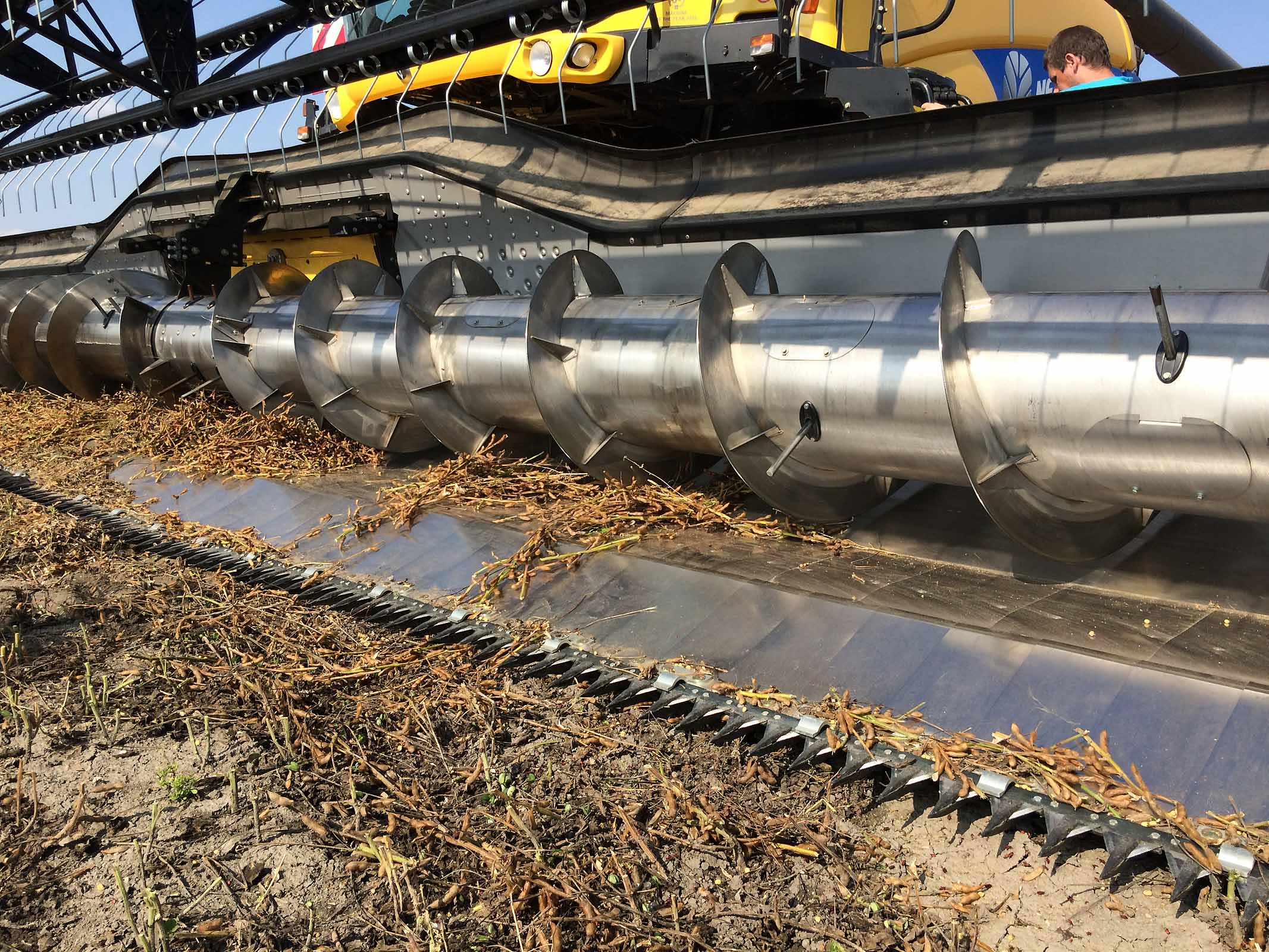 The FLEX module we tested in 2017 in soya with BISO double fingers and scythes including a BISO drive.

We have performed impact tests on hybrid frames and it was approved that in case the header hits the obstacle by the side (this means with a large lever), the frame is usually not damaged but the feeder house of the combine is.

Sometimes the designation of the ULTRALIGHT 800 model is a little confusing, because the number 800 does not mean the working width of the header, but the unrivalled extension of the vario table by a full 80cm. It was not only aluminum that was introduced with this model line, more precisely aluminum alloy. With this line came a number of other constructional features which were successful in operation. Glueing of joints, central mounting of the continuous auger, drive of scythes and auger from both sides, divided reel and extreme extension of vario systems not only forwards, but also backwards towards the auger. And the already mentioned ProfiSteer trailer with steerable rear axle (4 wheel steering). 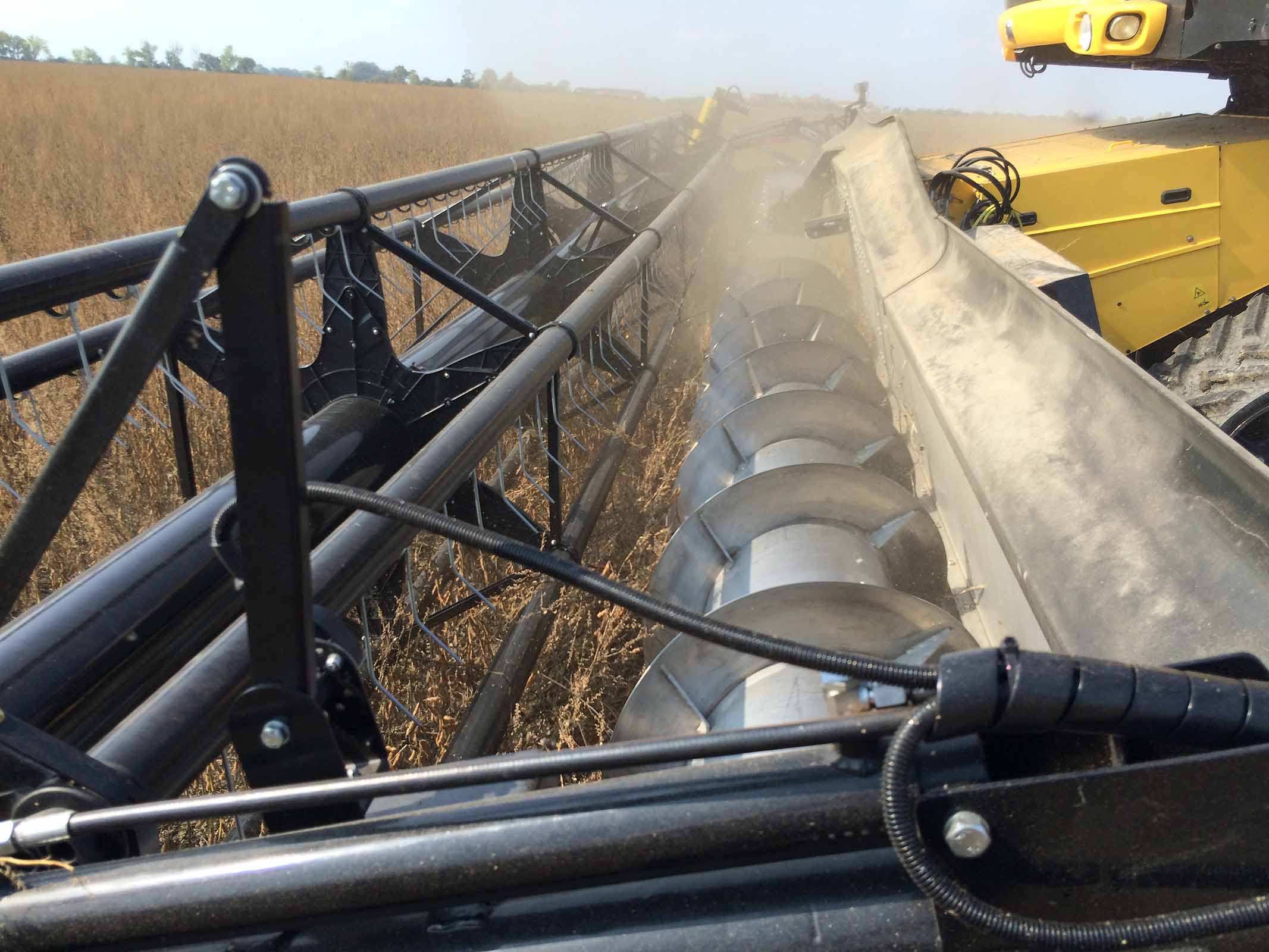 The rigid frame is essential for an easy and precise adjustment of the auger and for achieving a smooth flow harvested material into the combine harvester. Especially, the high performance rotor combines are sensitive to this.

The new 3D VARIOFLEX AIR i headers are using the hybrid frames approved by a whole generation of Ultralight model line mainly in the 3rd generation. But the research and development is going forward and this means that this frame is equipped with the FLEX module with a parallelogram now. The market has also changed a little during this time. Actually, the header with the working width about 10.7m is accepted as a standard in the segment of big combines and working width about 12m is no longer special. 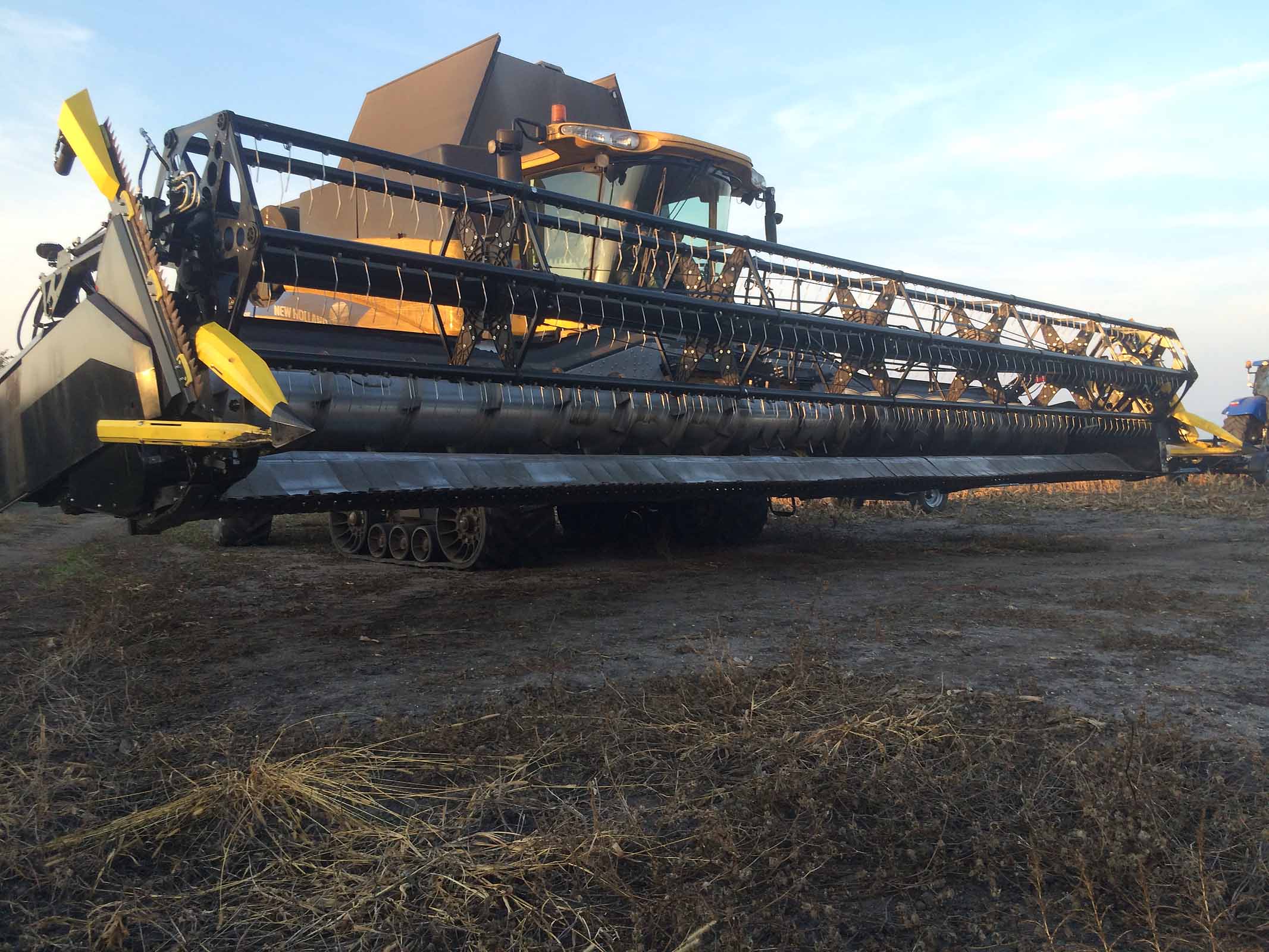 The FLEX module is lowered completely to its lowest position in the picture. 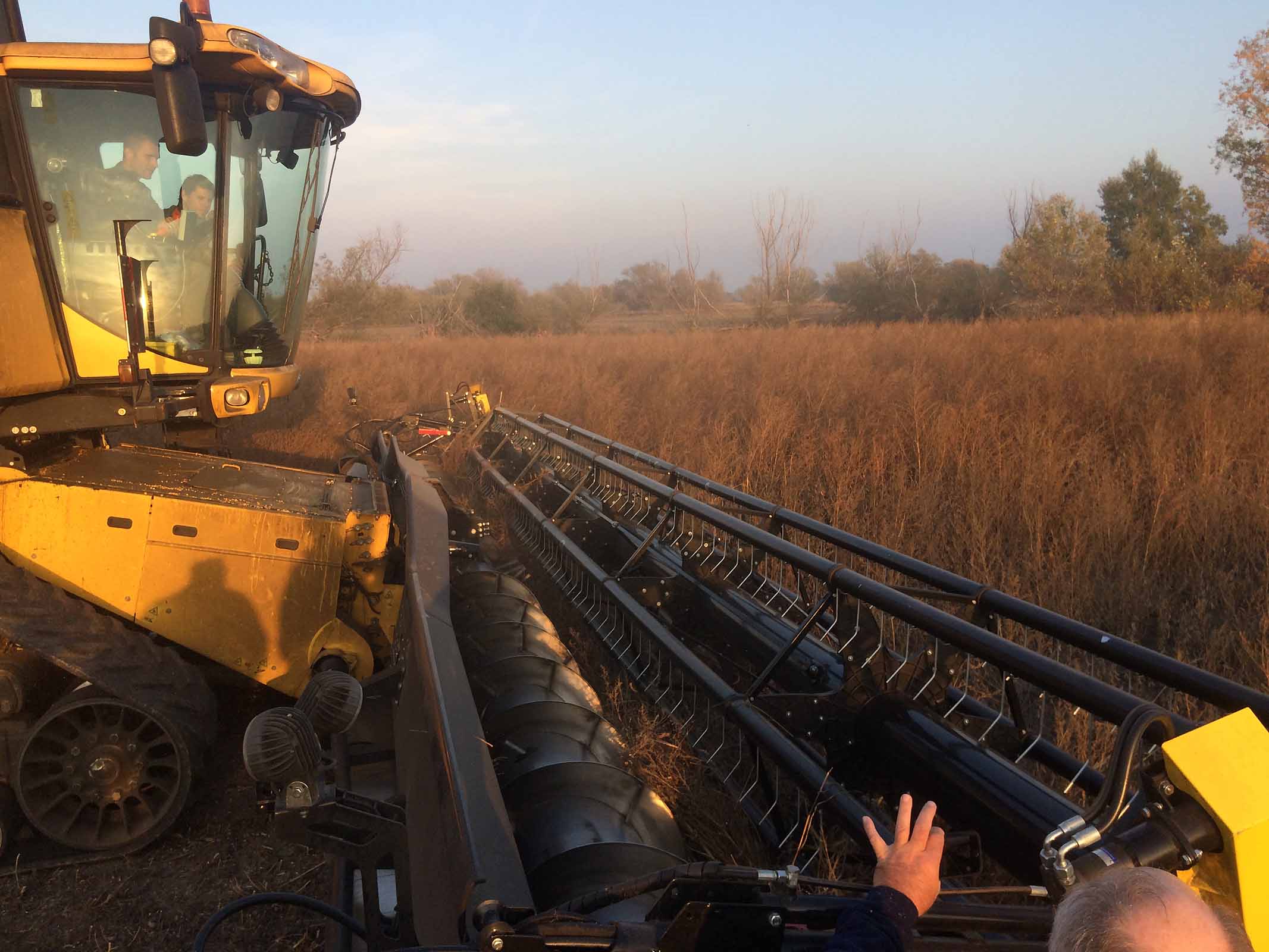 Some soya crops can be a hard issue for the header and combine driver. 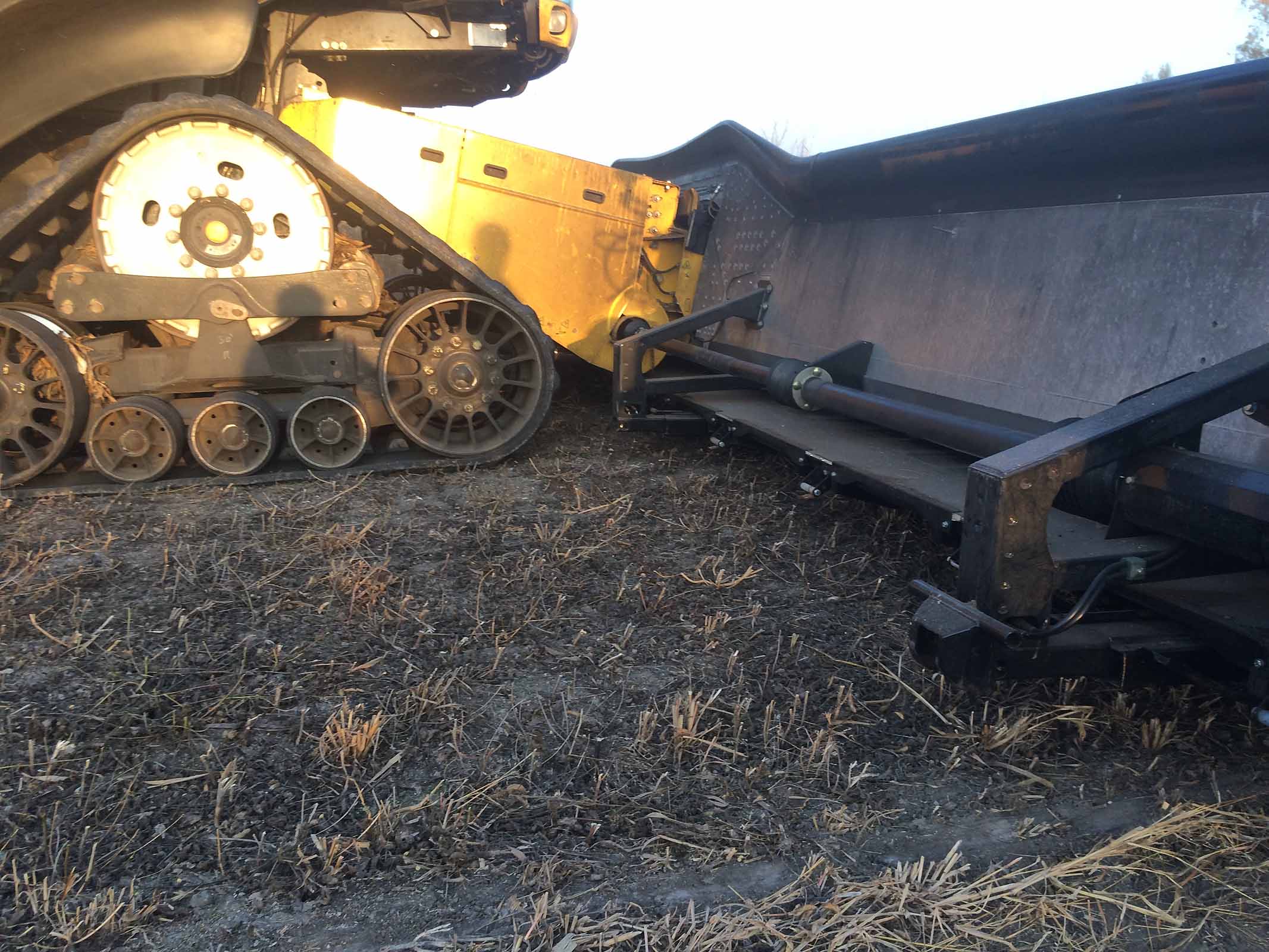 The combine tracked chassis is doing a perfect job. In the picture is clearly seen the VARIO system located under the frame. This is a typical feature and one of the key BISO patents used already from 2001. 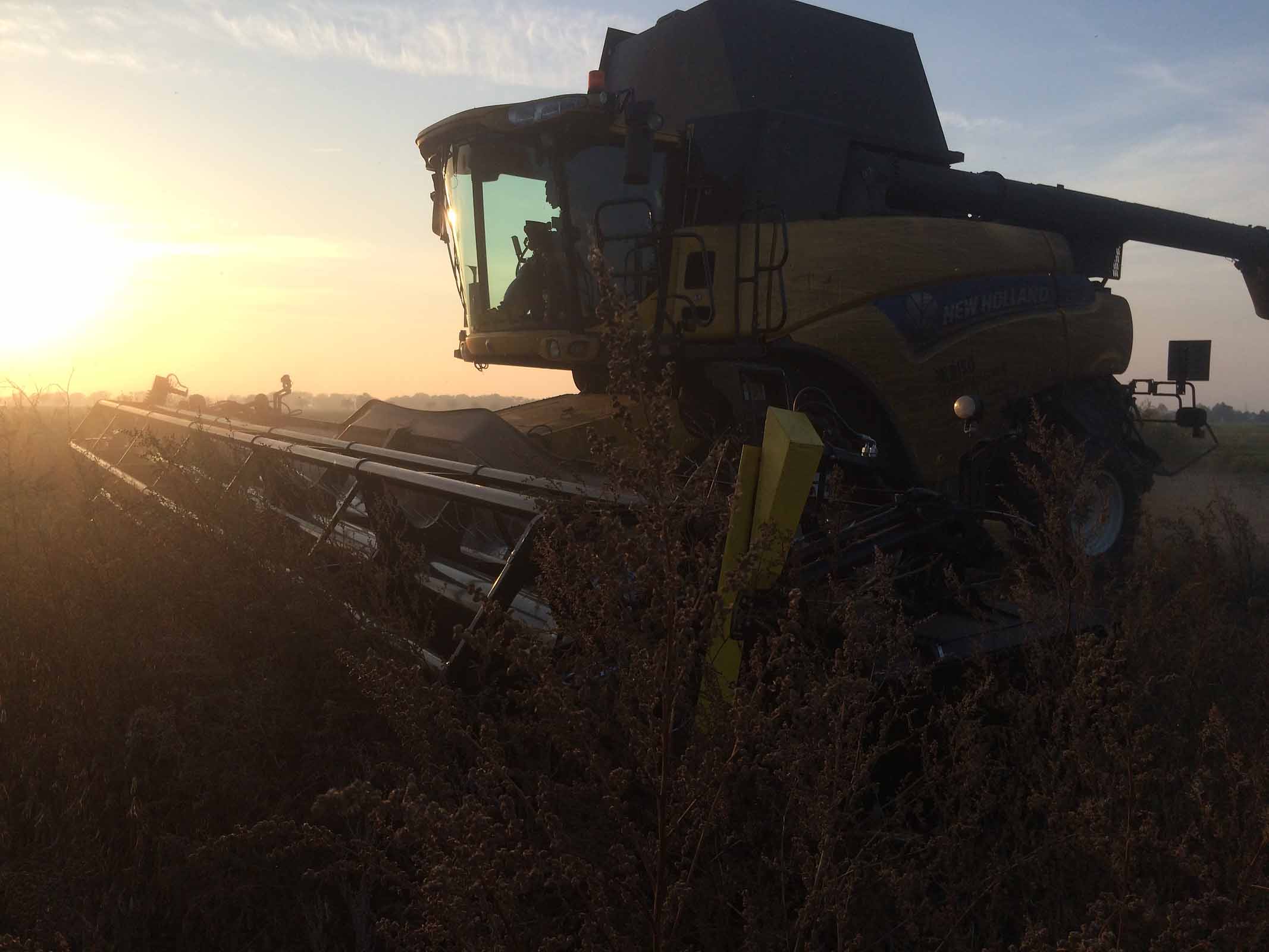 During the main harvest, we say that the combine works statistically 22 days “in action”. This develops a huge pressure on the crew and owner at the same time. With a professional header, our customers can achieve a daily output of over 100ha with combines like New Holland CR9090SL SmartTrax. For such a professional customer, a hybrid frame is a prerequisite for a long lifetime of all header components.